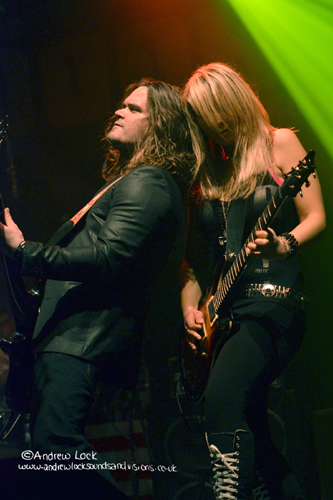 There are an exciting few months ahead for rock fans at The Leamington Assembly and the following shows are well worth a look at. (ALL INFO CORRECT TO THE BEST OF MY KNOWLEDGE)

MONDAY 14TH APRIL - Gazpacho bring their polished prog rock to the venue and I really enjoyed their last gig at the Assembly back in 2011. (My Classic Rock Society review of the band's 2011 gig can be found in my OTHER GIG REVIEW section)


FRIDAY 25TH APRIL - Classic British rock outfit Magnum should bring in a large crowd for this the band's 3rd appearance at the venue, the tour is in support of the bands new album 'Escape From the Shadow Garden' but as with their headline slot at last years Cambridge Rock Festival there are bound to be plenty of the bands classics on display. (My get ready to rock review of their 2009 assembly show can be found in my LINKS section and my take on last year's Cambridge set in my OTHER GIG REVIEW section)

SUNDAY MAY 18TH - For me the biggest show at the venue this year, Trinity is a very special charity gig sponsored by 'Prog' with performances from some of the biggest names in British Prog Rock including ARENA, Touchstone and The Reasoning alongside local band Lost In Vegas and acoustic sets. There will also be a charity auction. (You will find my reviews of Arena, Touchstone and The Reasoning gigs in my LINKS and OTHER GIG REVIEW sections and Touchstone have their own section in my PHOTO GALLERIES)

FRIDAY 30TH MAY - Being a big Zeppelin fan quite interested in this Boot-Led-Zeppelin gig.

SUNDAY 20TH JULY - Double delight with headliners Snakecharmer in town combing numbers from their debut album with classic early Whitesnake (the all star line -up includes Whitesnake favs Micky Moody and Neil Murray) and with one of my all time favourite bands, the awesome Voodoo Vegas opening for them this should be a very special night. (You will find my Classic Rock Society review of Snakecharmer's 2012 Cambridge Rock Festival set in my OTHER GIG REVIEW section and plenty of my Voodoo Vegas gig reviews and my review of my their fantastic debut album throughout my site and they also have their own section in my PHOTO GALLERIES)