GIG FROM THE VAULTS

A SET OF MY IMAGES AND A FEW WORDS FROM ONE OF MY FAVOURITE GIGS OVER THE YEARS. THIS IS A GOOD WAY FOR ME TO GO BACK OVER FOLDERS OF SHOTS FROM PAST SHOWS/SETS AND LOOK AGAIN AT THE IMAGES, AND A REAL BONUS IS SOMETIMES FINDING A COUPLE OF OVERLOOKED GEMS.
THIS SECTION WILL CHANGE SO WATCH THIS SPACE.


My only Josh & Co live outing and one of my early gig photography sessions, below you well find my review which made “The Get Ready To Rock Website” of this a very special evening in Bilston back in 2009.

I loved the album “Through These Eyes” before the show but seeing it played live has only confirmed how good it really is.
The band tonight included plenty of familiar Mostly Autumn faces with Iain Jennings on keyboards and the incredible vocals of Olivia Sparnenn.
The first track was the powerful ‘Land of the Gods’ followed by the rousing battle cry of ‘The Appian Way’ before things slowed down a little with the haunting ‘We Graze’ with it’s beautiful backing harmony vocals by Oliva, such lovely heartfelt lyrics on this track.
The great music continued with the uptempo rocker ‘Black Stone’ and then the track I cannot seem to get enough of at the moment, and which includes for me one of Bryan's greatest riffs ‘Slow Down’ an awesome piece of music with a touch of classic blues rock to it that had the Robin well and truly rocking.
Next a track that really came to life on the stage, the title track ‘Through These Eyes’ with unusual name dropping spoken verses and a catchy Mostly Autumn-esque chorus, a tale of the afterlife with a suggested line-up of a band that could play that greatest, most heavenly of venues.
It is with the addition of three covers connected with this fantasy band added to this track that the number completely takes off ‘All Along the Watchtower’ with electrifying fret work from Mr Josh of course, ‘Behind Blue Eyes’ and a roaring ‘Rock and Roll’ complete with a fantastic vocal performance by Chris Johnson (a future member of Mostly Autumn)
Other stand out tracks included a real show piece for Olivia's vocals the gentle understated ‘Old Friends’ and first encore track ‘Carry Me’ and they finished the night in seasonal style with Bryan leading the crowd through a sing-a-long of The Bing Crosby classic ‘White Christmas’.
So glad I managed to get to a Josh & Co. gig loved every minute of it, quality music all evening as usual a guitar masterclass by Bryan and another night that proves what musical talent there is in the Mostly Autumn universe.??Verdict - A magical night


MY PREVIOUS GIG FROM THE VAULTS GALLERIES ARE LISTED BELOW 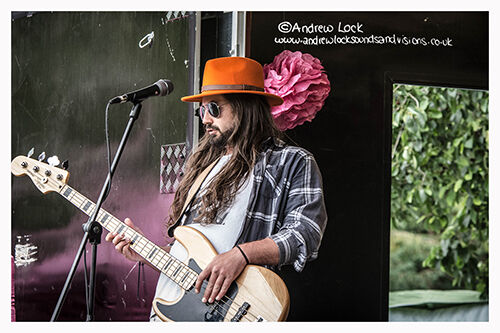